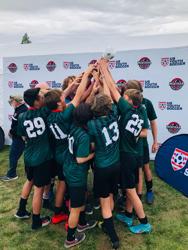 As the members of the Flathead Valley United 2006 Boys Premier Team collected their first place medals at the Montana Cup in Great Falls, in their final tournament of the 2022 season, it was impossible not to look back to the beginning of their journey. A journey that began back in March with indoor training sessions and an introduction into an holistic style of play that Coach Roland Benedict demands from every group he works with.

“It’s a long road, it is a lot of training on different cycles, staying committing to those cycles and working with new language, new demands, new requirements that maybe they haven’t experienced consistently from other coaches, and a style of play that is not easy and requires a high technical skill set,” said Benedict. “At the beginning there were a lot of guys on the team that in terms of technique weren’t at the level that was required, but as the season went on those guys kept pushing, learning and challenging themselves, and the growth was very evident.”

The growth may not have been evident immediately, as the team struggled in their opening Montana Premier League matches, but the group stayed committed to learning and began to improve drastically in a matter of weeks. For Benedict, the true turning point of the season came in Coeur D’Alene, Idaho at the Bill Eisenwinter Hot Shot Tournament.

After losing to Bozeman by double digits in their first meeting during the Premier League season, the team matched up against Bozeman for a second time, this time though things were different. Ryder Elliott, the team’s dynamic central midfielder, scored the opening goal of the match, and although the team ultimately lost, they controlled significant periods of the run of play and began to have a tangible sense of self-belief.

“We came out in that game, we scored first from Ryder Elliott in a great pressing sequence,” said Benedict. “We ended up losing 6-2 but it was probably the most important game of the year because they understood that they can do it, they can play. They dominated large portions of the game, there were long sequences where we had great actions of play and really progressive style and I think it was a big turning point that they left that game and they were on cloud nine like they had won 6-2.”

Needless to say, Benedict has never viewed results as the preeminent indicator of the success or failure of a team. Still, as the boys traveled to Great Falls Montana for the Montana Cup, the group was hungry to showcase just how far they had progressed. Throughout their four games in the tournament the team scored an incredible 15 goals, something that most would have viewed as an impossibility after losing the team’s primary goal scorer Max Everett to a season-ending injury earlier in the season.

Needing to replace Everett’s goal scoring potential, Benedict elected to move athletic wingback Trace Lenz to the central forward (9) position. According to Benedict, Lenz became one of the most important components to the team’s success after the positional change.

“Trace is one of the most athletically dynamic kids we have in FVU, he may be the fastest in the program at any level, and he was going to be a wingback, super pacey athletic with the ability to get in behind,” said Benedict. “He became a perfect holdup nine, he would get on the ball, help us in our buildup and still have the pace to get in behind and developed a fantastic partnership with Cole Pelucca who’s a scrappy goal scorer poacher in the box. So Trace’s development from one position to the other was huge.”

Utilizing their newfound attacking duo, the group played a brand of soccer that was not only reflective of the work they had put in throughout the year but lethally difficult to defend. The team got a dominating 6-3 win over Gallatin Elite in the group stage of the tournament before defeating Montana Surf in resounding fashion with a 4-0 victory in the semifinal.

In the final, the group was tasked with playing Gallatin Elite for a second time in as many days, but without many substitutes to utilize, Benedict recognized that the biggest obstacle standing in the team’s way would be fatique.

“The guys played a lot of minutes, four games in two days with two substitutes,” said Benedict. “By that final game we were coming in a little tired, which is understandable because we press high, we defend as a group and when we attack we like to get vertical very quickly.”

Despite the tired legs, the boys came to play and ultimately came away with a 2-1 victory over Gallatin Elite and earned themselves the 2022 Montana Cup. Flathead Valley United Technical Director Damion Blackburn lauded the team’s performance and improvement throughout the season.

“Roland’s teams consistently have this kind of development curve where the expectations are put in front of them and they play a very demanding style of football especially for most Montana groups,” said Blackburn. “So there is typically a developmentally demanding period at the beginning of the season where players are challenged in ways that they maybe haven’t been challenged before. It was great to see that success in the Montana Cup at the end of the season.”

The 2006 Boys will now begin training on their own for their high school seasons, and the hope is that they come back even stronger and more polished next Spring.